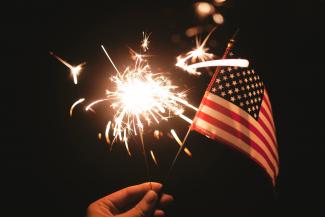 Intersting Topic Of The Month: Fourth Of July Traditions In America

The 4th of July is often celebrated with local parades, family barbecues, and beautiful firework displays. It’s a day for Americans to spend time with their friends and families in honor of the birth of our nation. Here are some notable facts about our Independence Day celebrations:

1. The oldest 4th of July celebration is the Bristol Fourth of July Parade held in Bristol, Rhode Island. The parade began in 1785 and has continued since.

2. The 4th of July has always been a day for eating a drinking in excess. George Washington allotted for double the rations of rum during the Independence Day celebrations held during the American Revolution.

3. This theme of excess carries through today. We see this in the Nathan’s Famous Fourth of July International Hot Dog-Eating Contest, in which people from around the world gather on New York’s Coney Island to see who can eat the most hot dogs in ten minutes.

4. Americans celebrate with over 15,000 different fireworks displays. A small town typically spends between eight and fifteen thousand, while larger cities spent well into the millions for these splendid shows.

5. The 4th of July is not just a rich day in America’s history, but for its presidents too. Three presidents, Thomas Jefferson, John Adams, and James Monroe died on the 4th. Calvin Coolidge, the 30th president was born on Independence Day.

However, you choose to celebrate the 4th of July, Orsinger Investment Group, Inc. wishes you a safe and happy day!