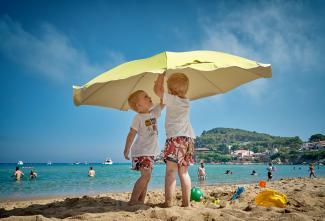 Interesting Topic Of The Month: School’s Out For Summer: The Story Of Summer Vacation

As summer vacation begins, students and parents alike might be wondering what they’re going to do with three full months of no school. Some, perhaps, might even be wondering why they have this break. It’s commonly believed that school kids started to take the summers off during the 1800s to work of the farm. Farm students went to school during the hottest and coldest months, taking spring and fall off to plant and harvest. Students in the city went to school year-round. In 1842, Detroit’s school year was 260 days long.

However, as cities became increasingly dense, the brick and concrete resulted in making cities increasingly hot. Thus, the middle and upper-class families started leaving cities in the summer to enjoy the cool countryside. Because school wasn’t mandatory at this point, students just left school for several months.

To combat this, legislators argued that students should get summer off anyway, and by the turn of the 19th-century, they’d cut roughly 60 school days from the hottest part of the year, resulting in the origin of the official summer vacation.

Whether you’re on a break yourself, have kids enjoying this gap, or you’re just hoping to take a few days off, we wish you the best summer!