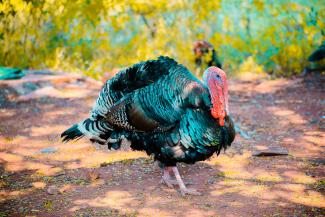 Interesting Topic Of The Month: The History Of The Thanksgiving Turkey

Every year, millions of Americans gather around the Thanksgiving table to share some of their favorite comfort foods: mashed potatoes, stuffing, green bean casserole, and—of course—turkey. Have you ever wondered why turkey became the traditional mean of the holiday?

The first Thanksgiving, organized by the Pilgrims of Plymouth, took place in 1621 and most likely there was no turkey served. While there were wild turkeys in the Plymouth area, written accounts of the first Thanksgiving don’t explicitly mention Turkey. Perhaps its importance was marked by the prevalence of wild turkeys for the colonists—or because turkeys were unique to North America. A turkey was large enough to easily feed a table full of family members and turkeys couldn’t be used for laying eggs or producing milk, like chickens and cows, so it made more sense to eat them on a day of celebration. Alexander Hamilton is credited with saying that, “No citizen of the United States shall refrain from turkey on Thanksgiving Day,” and in a letter to his daughter, Ben Franklin proposed that the turkey should be the official bird of the United States. No matter its origin, it’s clear that turkey is uniquely linked to Thanksgiving.