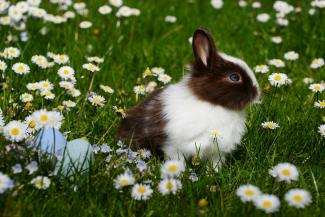 For many of us, April is a strange month full of volatile weather, taxes, and the promise of summer. April begins with a day of jokes and pranks on April Fools’ Day and sometimes houses Easter. Aside from these important events, April is a month rich in history that signifies new beginnings.

There is disagreement over how Easter got its name. Some say that April is named after Aphrodite, the Greek goddess of love, and the month of April was sacred to her. In the Roman calendar, however, the name is “Aprilis,” which means “to open” and was named for the rebirth of flora. This name is appropriate, given that April often marks the beginning of warmer weather and regrowth of trees and flowers. Anglo-Saxons called the month “Eostre monath” which inspired the “Christian Festival of Easter.” This connection to Christianity used to be two-fold. Until the year 350, the Birth of Christ was celebrated on April 1st.

In keeping with April’s fresh spring weather, the month is signified by two flowers: the daisy and the sweet pea. The daisy is symbolic of innocence, love, and purity; the sweet pea represents pleasure and bliss. Some countries still follow that the beginning of April is marked by the blossoming of these flowers. The birthstone for those born during April is the diamond, selected for its symbolic innocence. In England, the arrival of the cuckoo bird happens in April, which serves as a marker that spring has officially arrived. In the United States, April is a time for outdoor physical activity. It makes the start of baseball season and houses the Boston Marathon.

Despite its origins, the month of April brings new beginnings, innocence, and the promise of spring. We at Orsinger Investment Group, Inc. wish you a beautiful start to warmer weather!