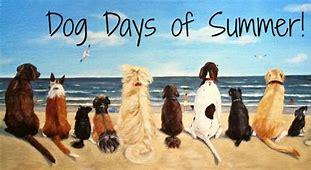 You know the days…the ones where it’s too hot for even dogs to play. We always figured that’s why they’re called the Dog Days of summer. And while it’s true those days are hot and long, they’re named for the time when Sirius, the brightest star in the Canis Major constellation rises alongside the sun. This year, the dates fall roughly from July 3rd to August 11th.

In ancient Egypt, the Nile River flooded every year around the time that Sirius rose with the sun. This event, called Inundation, was important in providing the nutrients to the soil for plants to grow and thrive. The Dog Days were celebratory for them.